"Owarai Bros.The 7th Entertainer on the Business Trip Edition is a moglider who has been responsible for the top batter at the M-1 Grand Prix 2021 (TV Asahi) and rises to the ground at once.The moment the god lottery was drawn to decide the order of the story, another finalist stood up and cheered them, saying, "I can go, go!"They, who had been said to be interesting in the entertainer world, finally went to the final stage.Apparently, the reason why I was able to go to the final was more of a change in the relationship between each personality, consciousness, and the relationship between the two.

──Moglider is a very loved impression of entertainers, but is there any word from the surroundings that say, "I have expectations?"

When the Shiba Kazu Laser was sold, he said in various places, "I'm waiting for the moglider to sell," and the locals who watched it on TV seemed to be "Kazu Laser is waiting."I was contacted.In addition, Nagano -san and those who are selling often give their names.

So is Hidetaka Kano.

The grass may have been stronger.

Tomo -Shige Maple Super Alloy, Westland, Kaminari, Tom Brown, and Pokota were guests in the live that we were doing, the 33rd unit of the East.We are just people who just see off the guests traveling as a finalist.

─ Due to the situation where the swallow does not go up, you have finally said in various places that you were able to face the M-1 seriously. Did you have a major opportunity to change your consciousness?

When an emergency declaration was issued in Shiba Corona, I lost my job for a few months.

You don't even have a part -time job, so you don't really do it.

When the words are unnecessary, when the words come out, I started to think, "Is a comedy live absolutely necessary?"。I want to do it because I like comics and live, but I have to be interesting to be needed and I have to sell.After all, I said, "I have no choice but to catch the" M-1 "."

Until then, I had a T -shirt and barefoot, but at that time I changed my costume.

─ I was worried about wearing shoes.

There are some hygienic places in the corona, and isn't it serious after all?That was also influenced by Pokopo took off the kimono and put out the suit.

I take a grass -age, and when I look at myself to get such a laugh, I feel pathetic (laughs).

The turf "39 years old" is too far away as a number blur (laughs).If I wanted to take everything that I didn't need and simply wanted to get rid of it, I decided to face the "M-1".

で す か Have you ever been aiming for something other than the M-1?

Rather than a thief, you are not suitable for YouTube, there is no special skill, and what can you do other than comics?If you think about the elimination method, it feels like "M-1" remains.Even if I was called to the program, it ended without a splash, and I realized that this was probably because the story was not properly.Until now, we thought, "It's okay because it's good," so we had time to over time, but the milk boy and pickopops were short, making easy -to -understand and interesting stories.

You're an entertainer of the turf "professional".If we were told that we could be a professional, we talked first to be confident.

── What is the definition of “professional”?

After doing what is being asked for turf, return with plus alpha.In the first place, our geis -style is something that we have reached without one thing we can do if we explore what we can and what we cannot do.When I returned to that idea and thought about what I could do now, I made a comic and chose a way to get it, and gave an easy -to -understand result.

It was great that Tomosige in 2020, when Westland and Nishikigoi, close to the finals.I was sorry to leave it.

For the first time, I was disappointed with "M-1".Until now, I have never felt so frustrated.

I wasn't aware of the grass, but I may have had an effect on being born.Before Corona's evil, I was living without going home, so I thought I wouldn't be able to do my parents, and I was told around.However, the time when I couldn't play outside and the timing of my child was born, and when I was doing my parents, I came to say, "I changed my face."

I think Tomojige and Shiba -kun have grown up.In the old days, I often played such interviews, but I still saw the answer and answers ...Recently, the amount of work has increased, and I started LINE for me and the manager.Even in debt, I got along with Gingin Maru Hasegawa and bought a good mobile phone ...

It is Hasegawa of Shiba the Ginginmaru....... Will it be an article?Gingin Maru Hasegawa.

It's a story of Shiba Gingin Maru!

When I had no work in Shiba Corona, I was talking in the park all the time, but at that time I was talking about that rather than making a story.Listening to people's stories or doing the minimum, they don't get to each other appropriate for each other.I think it was big for me and for this person.

─ Did you change your character rather than comics itself as a factor in the finals?

Shiba That's right.Manzai is the same because there is only something you can do.After all, if you don't feel well, how good you can do is useless.Manzai is the job of people.

─ Did you get along with you since you started talking like that?

I have been together for a long time, and I have been using the phone and LINE frequently.When the time became longer, you can understand what Shiba -kun thinks more than ever.

It wasn't an exaggeration, but for 12 years since I worked on it, I only thought about Tomohige.It's been a brain for a pair.I knew most of the things for a long time, so I didn't really feel that I had deepened since I started talking, but I was able to get the purpose properly.

There's something like a direction to see.Also, I was able to ask a lot of questions to Shiba -kun.There were times when I was scared and thought I shouldn't ask too much, but when I heard it, I would talk.

Tomosige Shiba -kun is not afraid of the intervening, so sometimes he doesn't talk.If you smoke, you will lose stress, so I also invite me to a smoking area to take a good mood.

If you get 10 million yen (interviewed on December 16, 2021), please make a huge cigarette -shaped smoking area. 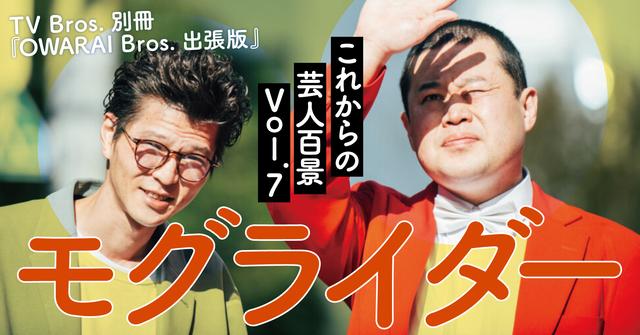 In terms of the changes in the story, the planning corner of the live "Eastern 33rd unit" (Note: The person who first removed the black sticky notes on the hair part of Takashi Hosokawa's poster, and first came out.Shiba -kun made something like losing, such as losing, was popular.)From there, the moglider was in good shape.I think the fun has come to be conveyed for three or four minutes.

─ Please tell me the best cucumber of Moglider, which has become a “M-1” specification and has been reborn in terms of feelings.

I have been able to show off a lot of live shows in various regions, so I think it was easy to understand on TV, and it was a story that was easy for young and old men and women.

I feel that it has become a story that has a personality than the grass.I think the person who watches the story will think, "I guess these people are the same people."Recently, I'm worried about the life of the stars, and I've been thinking about extra solutions, and I'm doing a story to get along with it, but my private life has been such a decade.I'm basically troublesome and I don't do anything, but on the contrary, I can't do anything but move.After the thief was scattered, I came to the end of the way, saying "Mo -tsu", and came all the time with my head bowed, and it became a comic that came out as it was.

──It seems that there is a place to raise children.

Shiba I have thought a little.Oh, both children are the same.

In the official interview after the second round, "I did not laugh if I tried a one-year-old child who did not understand the words, but if I imitated the 100 of Shinichi Mori, I got 100 people.I was impressed that I was saying that I wouldn't laugh unless I showed it. "When Moglider's story seems to be tempa at 100, is it the most interesting when Shiba's 100 Tsukkomi appears?

Shiba That's really true.It's not best to save yourself and do this much.I was lucky when I realized that through raising children.Everything is the teacher....... I put a little bit of a tower (laughs).

Moglider ● Daisuke Shiba (born on July 25, 1983, from Ehime Prefecture) and Tomoshige (born on May 31, 1982, from Saitama) met and formed a combination in 2009.In 2021, he made the final "M -1 Grand Prix" final, which is said to be a feat since Knights at Maseki Entertainment.A comic that polished the unique story called Tsukkomi and an error, left a claw mark and pulled it to the media.Delivery of material videos on YouTube "Maseki Gengeisha Official Channel".