HENNGE Co., Ltd. (hereinafter referred to as HENNGE) announced a large update of the cloud authentication base "Hennge One".

Hennge One is a SaaS authentication base that provides cloud security services such as Microsoft 365, Google Workspace, BOX, LINE WORKS, and other cloud security services such as secure access to multiple cloud services and single sign -on, e -mail transmission measures, and email archives.However, functions such as "Hennge Secure Download" for PPAP measures, "Hennge Cloud Protection" for targeted attacks, and "Hennge Lock Plus" for mobile app management will be launched on October 1.

"I realized that the most required of customers was SaaS in the wake of the Great East Japan Earthquake, and is now in trouble with the introduction of SaaS, centered on security know -how.Hennge One, which removes things, is developed as the main business. In 2011, Hennge One, which appeared as email security SaaS, added new features one after another to incorporate customer needs, and now as iDaAS.It is provided as a security suite centered on access security. Thanks to you, the number of users is steadily, and in this field we are proud of being close to the top sharing. "

Mr. Ogura said about this situation, "I introduced it in an emergency evacuation in the corona, but there are surprisingly many useful services when I use it.Isn't it? I'm still experiencing various convenient services, but I would like to support customers with Corona/After Corona's way of working with SaaS. "。

"Of the 10 major information security threats announced by IAP last month, the first ranked was a threat that aimed for new normary work styles such as telework in third place. The use of private PCs and use from home networks increased.It is due to being there. According to a survey by Tokyo Commerce and Industry, the cause of information leakage is about 49 virus infection and unauthorized access..5 %, misplaced and misplaced 31.It is 0 %.In November last year, Takuya Hirai Digital Reform has declared the PPAP declaration, which has led to a movement to abolish PPAP.The needs that have been revealed by these corona evil are divided into three types: "removal PPAP compatible", "targeted attack countermeasures", and "mobile app management", and it was released this time as a new feature "(Mr. Akiko).

Hennge Secure Download, a removal PPAP compatible function, converts the attachment of the transmission mail to the download URL.Until now, Hennge One has provided functions such as temporarily holding and encryption to prevent incorrect transmission.It can be prevented.It also provides audit support and testimony to trail preservation that are difficult to realize by using online storage. 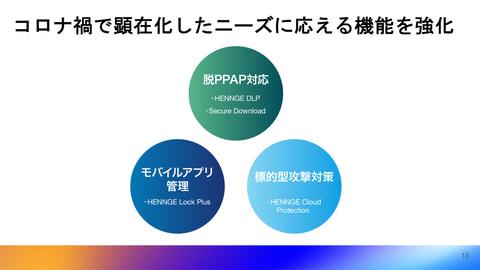 In Hennge Cloud Protection, which is a targeted attack countermeasure, it defends multiple layers using functions such as reputation, behavior detection, and sandboxes for receiving emails.The highest detection rate is a highly evaluated F-Secure security engine, which is highly evaluated, and the feature is that it is overwhelmingly low-cost.

In Hennge Lock Plus, a mobile app management, it is possible to compare MFA (multi -factor authentication) and device depletwords by summarizing the authentication of iOS native mobile apps in Heninge.

In addition, in addition to a set plan that allows the functions to be introduced together, a single function plan is provided, so it can be freely combined according to the needs.

"In addition to the new features announced this time, Hennge One provides a variety of functions. We want to combine these functions to provide customers a secure business environment."