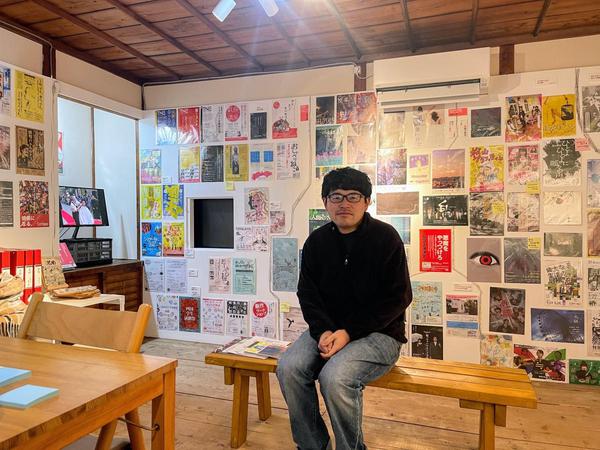 "Story Cafe Kamadoneko" (1 Heiwadori, Matsuyama City) 2nd floor "PAAC Heiwadori Art Center" is currently holding "21st Century Flyer of Ehime / Theater His Archive 2000-2021 (Chuyo)" There is. (Matsuyama Keizai Shimbun) Planned by Motoki Hata, who runs the community "Meguri", which explores ways to get involved in culture and art from the audience's perspective by creating connections between the audience of performing arts such as theater. In addition to exhibiting leaflets of theater performances that were adopted by Matsuyama Bunka Lab (Hanazonomachi 4)'s 2021 cultural support program "Rabo Korabo" and mainly held in Ehime Prefecture after 2000 (Heisei 12), the theme Held a talk project "Kangeki Tea Party" inviting guests to match the event. On January 14th, the "Matsuyama Theater Summit" will be held to think about the future of local theater. Mr. Hata is from Niihama City. Since he was in high school, he began to work on theater, and even after he got a job, he continued to work in social theater companies. While being involved in theater as a creator, in 2011 (2011), he started running the blog "Kangeki Annai", which summarizes information on Shikoku theater and stage performances, but as the site grew, "Shikoku Theater" It is said that it has begun to be aware of its function as an "archive that preserves information that can be seen at once in history." When I lived in Tokyo due to a transfer, I had about 140 plays a year, and in 2019 (Heisei 31) before Corona, I had more than 160 plays, dance, circus, talk events, etc. in Matsuyama. Mr. Hata said he was visiting the stage. From 2019, a lot of materials were gathered at hand while holding the "Theatrical Tea Party" where the theater and the stage were talked about once a month, and the flyer arrangement and exchange meeting, which led to the holding of this event. Mr. Hata smiles, saying, "Blog management is a theater activity that can be done at home." "There are other ways to get involved in" theater "other than hitting a performance. The long-standing blog" Kangeki Annai "has led to the holding of events such as this leaflet exhibition and tea party. There is a possibility of various forms of efforts. " "The homepages of past performances that we have been familiar with often disappear over time. When the audience, who are the leaders of the local culture and art, look back on the history of past performances and Ehime theater, blogs and collections. The organized leaflets are an important clue, "says Hata. From the wall of the stairs leading to the venue to the exhibition room on the second floor, there are about 300 leaflets to be displayed by classifying them by theater. There are about 500 leaflets filed by age group. During the session, 5 talk events "Kangeki / Tea Story" will be planned. In December, she organized a talk project on the theme of the city drama "Human Powered Airplane Solomon Matsuyama Hen" and "People on the old and new theater information sites in Ehime" that were performed in Matsuyama in 2008 (Heisei 20). .. On January 6th, we invited Mr. 2B, a former member of the tent theater troupe, as a guest as "Tent play, days of traveling troupe all over the country", and on the 11th, we will continue with "Theatrical company, actor training center, civic theater / Ehime". Hiroto Masugata of Matsuyama Arts Management as "theatrical activity", and Naoki Tanaka of Toon City area revitalization cooperation corps and former cooperation corps as "the art of Toon, after moving to Ehime" on the 13th. A tea party will be held with Rikizo Takayama of SCHOP PROJECT, who handles performances, as a guest. Mr. Hata said, "The fun of performing arts is that the performance is unfolded in the same space in front of you, and the audience can become a part of the creator by seeing it. The leaflet exhibition is a project that goes back to the theater scene of Ehime. At the "Matsuyama Theater Summit" on the 14th, I would like to think with you about the future of the theater culture in the region based on the history so far. " From time to 17:00). Until January 16th. Kangeki and tea party will be held at PAAC Heiwadori Art Center from 19:30 to 22:00 on January 6th, 11th and 13th. The Matsuyama Theater Summit (reservation required) will be held at the Theater Cat from 19:00 to 21:00 on the 14th. Free admission and participation.