In the file in front of Mr. Atsushi Tomita, a well-preserved paper pattern is included so that it is not exposed to the air as much as possible.To prepare for digitization and prevent deterioration = Taken by Hiroyuki Kondo on the morning of December 10, 2021 at Tomita Dyeing Crafts in Shinjuku-ku, Tokyo.

New Year is also the season for kimono, but do you know "Komon dyeing"? Using the traditional pattern dyeing technique developed in the Edo period, mainly sculptors in Mie Prefecture have hand-carved fine patterns on the patterns. However, it is difficult to preserve the pattern because the pattern deteriorates over time, and there are few successors. Crowdfunding has begun to raise funds in an attempt to digitize, preserve and inherit such patterns that are in danger of disappearing. Can Japan's unique culture survive? [Hiroyuki Kondo] "Tomita Dyeing Crafts", located at the foot of the Kanda River and Omokagebashi, a famous place for cherry blossoms in Tokyo, is a long-established dyeing shop that established a workshop in 1882 (Meiji 15). In addition to kimono, there are ties and scarves with patterns, umbrellas, art tiles, wallets, etc. in the store. Beside that, President Atsushi Tomita (73) muttered a pattern with a torn pattern in his hand. "This cannot be used for dyeing. But if you dispose of it, even the pattern will be lost. The pattern is a cultural property filled with the sensibilities and techniques of our predecessors. I want to save it somehow." The turning point was in the fall of 2012. "TOKYO CRAFTS & DESIGN", a project to create "masterpieces of the 21st century" by collaborating the techniques of traditional craftsmen in Tokyo and the ideas of designers, was held at the Tokyo Metropolitan Art Museum. Taking advantage of Mr. Tomita's Komon who participated as a craftsman, the "Komon Chief" proposed by the designer was selected as 10 certified products from the 265 entries. Tomita is said to have awakened. "You can make different things with the technique of dyeing kimono. It was a shock because it was only one kimono until then. There is a possibility that various ways can be opened if there is a pattern." There is an old paper pattern that is owned and estimated to be produced during the Kansei era (1789-1801), but it will soon be weathered. Is there a way to save it? After consulting with the Tokyo Metropolitan Industrial Technology Research Center, a method of digitizing and storing with a scanner and reproducing with a laser cutter was proposed because of cost and technical advantages. After that, he sought to reproduce the handmade feeling of color glue (Ironori), and since the fall of 19 he has been working on converting 200 sheets of data into data, but he hits a wall. Therefore, in cooperation with the Sony Group, we started crowdfunding on November 22, last year. In addition, it is said that the harsh environment of the craftsmen who convey this traditional technique to the present age is also behind the fund raising. Looking at the small pattern, a very small pattern is repeatedly drawn. In fact, most of the patterns are "Ise katagami" in Suzuka City, Mie Prefecture, which is said to have originated in the Muromachi period. A craftsman hand-carves a pattern on a pattern that is made by pasting Mino Japanese paper with persimmon tannin and drying it, and when it comes to a small pattern, it is as thin as a single hair. During the Edo period, the Kishu domain protected Ise katagami and became a major industry, and before the oil crisis (1973), there were more than 300 people involved. The "Ise Katagami Preservation Society" made by craftsmen has been designated as an important intangible cultural property holding organization of the country, but there is no remnant of its former glory in the local area. Riichi Sato (74), the former vice president of the "Isegata Paper Cooperative" on the selling side, also laments. "Currently, there are about 30 people involved, which is one tenth of the peak." It is said that the background is the separation of Japanese clothes and the development of inexpensive manufacturing technology. "When the patterns for consumables became old, there were orders for re-engraving. However, most of the orders now are silk screens instead of hand-carved patterns, and the craftsmanship has decreased." ◇ Traditional techniques are in danger of survival. Face "Most craftsmen are in their 70s or older, and young people in their 60s," said Yoshio Kaneko (67), a hand-carved craftsman and vice chairman of the Preservation Society, who is worried about the continuation of traditional techniques due to the aging of the population and the difficulty of successors. .. "In less than 10 years, there will be no more teachers. (Due to aging) my eyes will be weakened and I will not be able to do the detailed work that I did when I was young. I am training successors, but I will eat. There are many people who can't do it and give up. ”In recent years, the local community has been making products that make use of Komon dyeing designs and techniques for arts and crafts and interiors. For that reason, the people concerned expect the crowdfunding promoted by Mr. Tomita and others. Mitsuru Kobayashi (63), the chairman of the cooperative, reveals his distress about the harshness of the current situation. "For hundreds of years, Ise katagami has survived according to the times, but will it be possible to match it from now on? It may not be five years until the time limit, and I have to find new demand and usage ... It would be nice if you could put it in. ”Mr. Tomita's digitization of the pattern also reflects the thoughts of Mr. Kaneko and other Suzuka craftsmen who are declining. "If both carvers and sellers can convert patterns into data, store and inherit them, and sell them to generate income, it will lead to the development of successors. The" Ise Katagami Archive "in Mie Prefecture will be established. I wish I had it. ”Cloud funding is available from the Tomita Dyeing Crafts website (https://tomita-senkougi.com/). Positioning this initiative as the first period, we prepared art tiles with various patterns drawn as a reward. It is said that it will continue to raise funds for about a year. 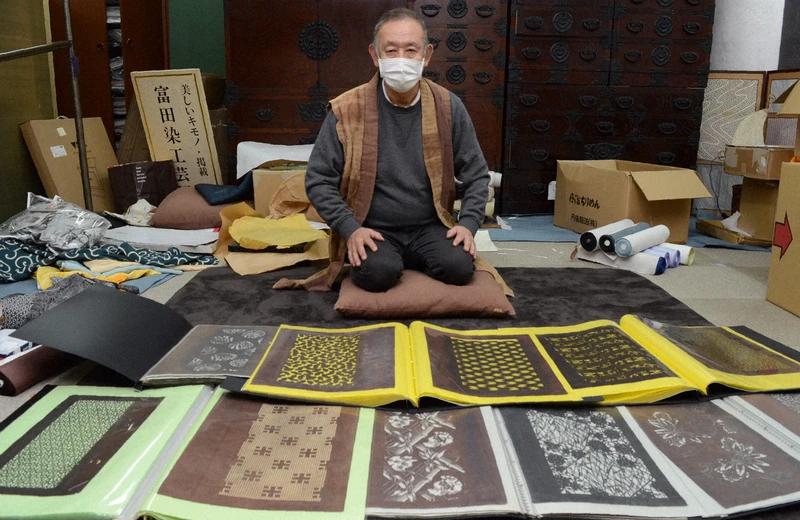