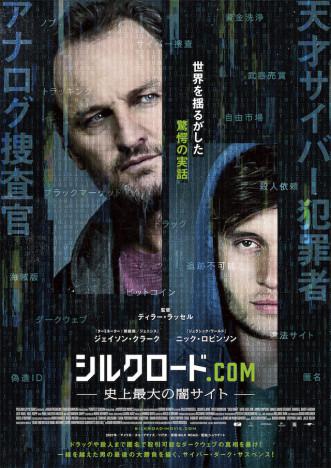 Comments from director Tiller Russell have arrived from the movie "Silk Road.com-The Greatest Dark Site in History" released on January 21, 2022. [Photo] New scene photo of "Silk Road.com" This work is a cyber dark suspense born from an astonishing true story that depicts the final big game of a man with sorrow. In 2011, the dark site "Silk Road" made it possible to trade completely anonymously from illegal drugs to buying and selling weapons and murder requests using two encryption technologies, the dark web and the cryptocurrency "Bitcoin", which are not hit by search engines. Was born. Also known as "Amazon in the dark" and "eBay for drugs," daily sales exceed 100 million yen. The police had completely evaded the FBI's cyber investigation, but in 2013, it was an analog investigator who couldn't even use a computer. Nick Robinson of "Jurassic World" will play the genius Ross William Ulbricht who launched "Silk Road", and Jason Clarke of "Terminator: Genisys" will play investigator Rick Bowden. Director Russell is a person who has worked on many documentary works such as the documentary program "Night Stalker: The Serial Killer Investigation Record" which recorded the first place in the United States in the Netflix ranking. "The idea for this film began the day after Ross William Ulbricht was arrested at the San Francisco Public Library. I still have vivid memories of that time, and I still feel the feel of the newspaper page reporting the incident between my fingers. I remember the title of the newspaper, "Russell recalls the shock of Ross William Ulbricht's arrest. "This movie is a portrait of Ross William Ulbricht drawn by multiple conflicting stories. It's a different version of Ross from different sources. It's the only story in the world. You'll see boy scouts, dreamers, lovers, visionary figures, engineers, "disordering" liberists, fanatics, guru, scammers, weirdos, masters, and mastermind Ross. In essence, Ross was a ubiquitous person, a mirror that reflected the people around him, "said Ross William Ulbricht, who committed the cyber incident that shook the United States." He revealed that it was drawn, "I took an approach like making a documentary. I dug up all the information that can be found in the historical archive, such as all the press materials, the court materials, and all the rumors that can be traced from direct sources. I read them all, looked them up, mixed them up, and put some time into them. Then I threw them all away, and without prejudice, I went back to the script with a full-turning head. " I'm getting closer. At the same time, new scene photos were also released.